To call Duffy Bishop a blues singer is like calling Bette Midler a rock singer. Like Midler she flirts with cabaret, jazz, and straight up rock and roll. The first time I met Duffy was at a hole in the wall called the Scarlet Tree. Dressed in a short plaid skirt, Doc Martin boots and fishnets, she proudly wore a Mohawk as she fronted her band at the time, the Rhythm Dogs. We sat together and I told her that she was going to be the hottest act in the Seattle blues scene. My prediction was right as she and her band went on to pack clubs and was featured at many blues festivals. Besides being a dynamic performer, she was very approachable and never let her success go to her head. 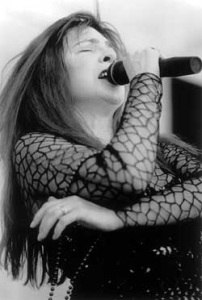 Born in Redding California, she began singing at an early age, “I started singing as soon as I started talking, making up my own little songs that I would sing to my parents,” said Duffy, “I always say I started entertaining my parents at a young age, making them sit in the living room and watch me dance and sing in costumes I’d concoct.”

The family then relocated to Yreka, but finally settled in Woodland California, “It was there in third grade that I got to do my first public performance and was hooked forever on performing,” said Duffy. “I put a group together in 6th grade and we called our selves the Effervescence. We were only in the planning stage when we found out that the word was like a bubbling laxative.” After that her and her friend, Jan Dunton, played for several years as a folk duo. 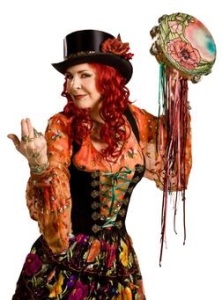 “I had an older friend and mentor Patti Tauzer,who introduced me to so many folk/blues artists. The soul artist were found late at night on Wolfman Jack’s shows sometimes drifting far enough North,” explained Duffy. “I was lucky to know the guys in wonderful local band, Roadside Attraction that let me sit in and sing a few times.”

She also loved doing musical theater and went to college as an Art Student, but quickly joined her first band called CODA. “It was a ten piece group that played Chicago, Sons of Champlain, Cold Blood,”said Duffy. “From there, with the bass player and the guitarist, I went on to form a glitter/rock/soul band called Toulouse, that had quite a few a incarnations.” She moved in 1975 to LA with her then husband who had been signed with his bandmates to iWarner Brothers. She left her band in Sacramento and did some backing vocals in LA. She played the Whiskey and the Troubadour, with other people’s bands.

In 1979, wanting a change of scenery from Los Angeles, she relocated to Seattle with her husband and formed a group called Skeezix. She also did local theater and became a featured performer with cabaret groups such as, Eine Kleine with Chad Henry, Jayne Muirhead, and Karen Cody and Champagne Express with David Maddox, Jane Bray,& Mark Coffin.

She divorced in 1982 and went for an audition in 1983 for the band Cool Ray & the Shades.
“That’s where kismet placed me in Chris Carlson’s creative world,” said Duffy, “We clicked and were lured by our then saxman, the late great John Lee to start a new group where we wrote more and became the eclectic Duffy Bishop & the Rhythm Dogs.”

“We did two recordings, Dogs Run Cheap and On a Journey (with beautiful backing vocals from northwest divas Nora Michaels, Nancy K. Dillon, L.J Porter, Aileen Denton and Kate Hart,” says Bishop, “We were also a part of Guitar Outlaws, that Carl Sander and Chris developed and have kept the Christmas Chorale going every year since it’s inception at The Eastlake Zoo in Seattle.”

“I’ve always loved singing songs that tell stories, and mixing all kinds of music together so I can be as free as possible,” says Bishop. ” Like many performers I think I’m quieter, shier and more awkward off stage that on. On stage the clown in my soul loves to perform and make people smile and feel deeply. In a room full of people I do not know yet I feel a great uncomfortable angst.”

Choosing songs to act out is an easier way for her to connect and communicate with people. She has always loved the theater and acting and will gladly add a show tune to our set if she thinks it will entertain. “I added Sweet Transvestite to our play list after getting to fill in as Frank N Furter for the thrilling G. Valmont Thomas, who had another play he was scheduled for, in the 1986 Empty Space production of Rocky Horror Picture Show,” said Duffy. “The Rhythm Dogs would go from Sweet Old Fashioned Girl to Sweet Tranvestite or Sympathy for the Devil all in one evening.”

In 1991 the Dogs were done. She premiered a play at the Empty Space Theater by Susan Ross, simply called “Janis” a play about Janis Joplin. “Sweet fortune smiled on me again, introducing me in person to Sam Andrew who’d been working in town at a bank,” said Duffy. “The guys in the show’s band, Chris, Keith Lowe,Bruce Laven, Kevin O’Reilly and Jeff Hudis, had a band with Sam for awhile called The Queen’s of Denial.” She got to do two Northwest shows with Big Brother and later toured Japan with them. The end of the play brought about a new formation of The Duffy Bishop Band with Chris Carlson, Keith Lowe, Dave Jette & Henry Cooper.

“I seriously thought that it was a lot sunnier in Portland,” laughed Bishop. “Actually the guys all had other things they wanted to do too. We always loved playing in Portland, and the blues scene hadn’t been as eclipsed by the thriving grunge scene as in Seattle. Musicians are always trying to be relevant and keep working, so in 1994 with the thought of more sunny days and more places to play” Duffy and Chis got married,moved to Portland and released their first Burnside Recording Bottled Oddities ( Lily Wilde & Paulette Davis backing vocals) and then Back To the Bone and the Queen’s Own Bootleg from Key Largo with the stellar horns of Bryan Dickerson and Jon Goforth.

Shortly after that release she auditioned and was hired for one of the biggest events in her life: Teatro ZinZanni, “Chris and I performed many seasons in Seattle,San Francisco and Costa Mesa with the ever changing troupe of brilliant world renowned circus/cabaret/vaudeville performers” said Duffy. “We had a core band of Chris, myself, Dover Weinberg on keys, Phil Haxton on bass, Jeff Minnick on drums for our Trillium Label recording Ooh Wee. Phil passed as the cd was released.”
Duffy and Chris never took anything for granted and feel blessed to have played with great musicians, ” I got to do The Women of Blues shows with both Seattle Women and the Portland Women,Patrick Lamb’s Ray Charles Tribute, D.K.Stewart’s Etta James Tribute & Chris with John Mazzacco’s TBone Walker tribute.” They have past many years in between Teatro Zin Zanni “We have been playing with Dean Mueller on bass, Kelly Dunn on drums, Dave Fleischner on keys, Brad Ulrich, reeds, Chris Mercer Saxes, Joe McCarthy on trumpet. These musicians were all on our most recent recording “Find Your Way.”

They released the cd in April 2014. A year earlier they made the decision to move to Florida, more specifically Saint Augustine, where there really is supposed to be more sunshine, “Chris has been bringing me down here for 30 years and I loved it from the moment I first visited this ancient city with so much dense incredible history” says Duffy. “As we were finishing Teatro ZinZanni in Costa Mesa, I lost my mom and then 46 days later I lost my dad.”

That year she lost five friends and since have lost five more, “I was turning 60 and wanted to change my life,” said Duffy.”We are now planning our schedule for our two and a half months back in the Northwest starting June.”

Chris was raised in Jacksonville from age 9 until he left for Seattle’s University of Washington’s acting program around 1975. He was born in Camden New Jersey, His dad was an ad man and moved the family from New Jersey to Philadelphia, Chicago, Nashville and finally Jacksonville. “His older brother sparked Chris’ interest in all music, jazz,folk,blues,rock,country with albums he brought home from college,” said Duffy. “He started playing guitar at age 10 and played from then on. He had a duo with his friend Richard Wright when they were 10.”

They are now playing in a trio with Richard here in Florida after all these years. Chris misses his great musician friends that he has played with through the years The Dover Weinberg Quartet and all the crazy good players that took turns being Dover. “We appreciate reconnecting with folks down here and being welcomed into a new community that is the expansive & loving music family that we get to be a part of in this big ol’ world.”

Duffy,likes both performing and recording, but put a gun to her head and she would pick performing. “There is nothing like performing live for an audience who are moved by what you are doing. I want to make people happy, ease their sorrows, help them forget themselves for a while and revel in a world where music personally takes them,” said Duffy “I hope that our recorded music accomplishes this too, but I am so inspired by people one on one, that my reason for doing what I do is based on how they feel at one of our shows.”

She hopes she can continue for a long time, “Some people seek fame and money, but these are not the pay off from this profession that have pushed me to keep at it,” says Duffy. “People, love and the music itself are the payoff. Playing music with Chris Carlson for thirty plus years have gotten me through all the good and bad times in my life and made it all so much better.” 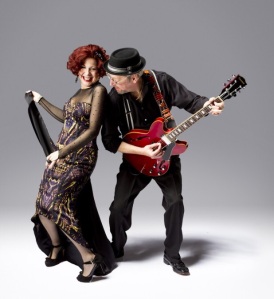 For more on Duffy visit duffybishop.com